On December 9th 2016 the National Museum of Scotland opened its doors to ‘Monkey Business – Get up close to the world of primates’.

The title and advertisements arouse interest as well as raising one big question: how serious is an exhibition with a title that has silly connotations?

Dr Andrew Kitchener, Principal Curator of Vertebrates, prepared the exhibition with a team of researchers to explain the relations, traits and threats of primates, using more than 60 taxidermy specimens following his previous successful exhibition ‘Cats… the ultimate predators’ (2004).

A view on relations

An immersive jungle design welcomes visitors behind the entrance doors: animal voices and the sound of rain set the scene with green plant-print walls that divide the large room; the air is infused with a jungle-like animal scent.

The exhibition starts off with a well-designed gallery of framed pictures of primates, among them are two mirrors in different heights, inscribed with “You are a primate”.

The first part outlines the relation between humans and monkeys, defining that we are all primates and how we are related to each other. Therefore, short texts provide an overview next to a complex family tree, detailing the evolution of the different species. Skulls and fossils displayed on the tree highlight the transformation primates went through the past 66 million years. Next to the main family tree, is an enlarged branch with details of human development over the past 7 million years. Unfortunately, the design of this sequence might lead to confusion as the tree and the branch look like they are being joined together behind a media station. This hands-on activity desk provides the users with a quiz game that compliments the exhibition section.

A few metres down the jungle path, a new topic points out individual adaptations: the bodies of various species have developed to live in different surroundings.

A second computer with a touchpad surface provides a simple jigsaw on the human skeleton. On the opposite, diorama-like showcases display examples of taxidermy from different animals and from past to present. The variety of shapes and sizes of primates is shown along with information on individual characteristics in a zoo-like setting.

A big part of the exhibition space is used for a topic called ‘on the move’. Movement and its necessary physique is explained next to a few representative taxidermy examples along with a film of primates in action. A fun looking but slightly distracting ‘jungle climb’ with tasks like swinging, climbing and balancing on a climbing frame is available for children under the age of 14.

The following food section connects smoothly to the previous content: the evolution of different types of jaw, teeth, agility and ability is explained at first. An engaging approach to how chimpanzees use tools is given in the form of a racing game called ‘Fishing for Termites’. Two players have to use magnetic sticks to collect termite-coins out of a termites’ nest while a meter counts all the gathered coins to announce the winner.

To gain food, all creatures evolve necessary senses as well as develop communication to help them survive. These are discussed in a further part of the exhibition by providing different viewers to compare the variety of sights primates can have or by showing interesting facts in a film, to name only a few examples of the educational approaches.

The next topic covers the social life of primates which is accompanied by a large showcase with a group of Macaques shown in a variety of social activities. Following that, the theme of the exhibition changes abruptly from child-friendly exhibits to a rather adult content, discussing the more serious theme of human caused threats most primates must deal with. 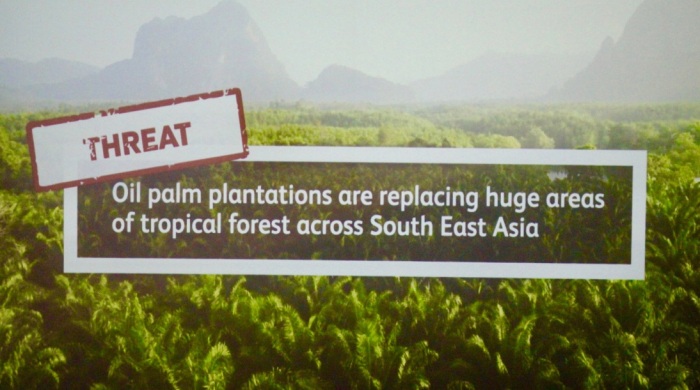 This quote is taken from a film, illustrating themes like the impact of environmental changes on primates. While the other topics are explained with very short texts, taxidermies and many games or hands-on activities, the style changes here as much as the content. All key facts are presented in texts that are not suitable for children as they either disappear too fast in the film or are too long to hold attention. One display case presents a head, skull, hands and feet of langurs and macaques that were illegally traded as trophies. Another larger display contains a few examples of nearly extinct types of monkeys with information on them in long texts.

A general focus lies on hunting animals, destroying their habitats and the increasing human population. While a further media station shows a film on vets helping seriously injured primates outlining how important active conservation is, a final multi-media desk asks visitors to help protect their favourite primates by donating money, promising not to buy a primate, to relinquish products containing palm oil and to buy sustainable sourced timber. Information on where to find these products or examples on what products contain the named materials are not given.

Andrew Kitchener planned to target a general audience in this exhibition which has a clear educational objective.

The intention is plainly readable: explain the relations, outline differences and similarities, reach the visitors emotions to make them aware of problems, show them how to help protecting the animals. The whole content is broken down to a level that is suitable for children, but far too simple for adults. While the first sectors meet the expectations of a very easy, entertaining exhibition, the final deviates from it. All texts are well written, but the density of the information given and text lengths vary a lot. The exhibited taxidermies are presented in habitual designed surroundings, unfortunately, the cases reflect the lighting a lot. To arouse more emotion, context information on the individual animals on display would have been great.

The term ‘Monkey Business’ does not meet the content of the exhibition, but it is very catchy. While the first half could be presented under this title, the second can’t be called ‘silly’ at all.

The fully accessible exhibition is on display in Edinburgh until 23 April 2017 in Exhibition Gallery 1, an admission fee will be charged. From summer 2017 on, the exhibition will be touring internationally, more information on the upcoming locations will be released within the next months.